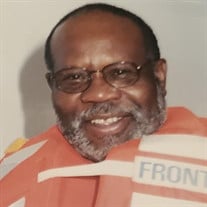 UTICA - Mr. Burnie Adams, Jr., age 82, went home to the Lord on Monday, December 7, 2020 at MVHS at St. Luke&#8217;s Healthcare after suffering a stroke. At the time of his passing, his wife and sons were by his side. Born in Quitman, Georgia... View Obituary & Service Information

The family of Mr. Burnie Adams, Jr. created this Life Tributes page to make it easy to share your memories.