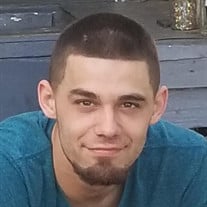 UTICA - Mr. Bryce A. “Dude” Barretta, age 27, passed away peacefully on Sunday, February 14, 2021 with his family by his side, after a short illness. ​Born in Layton, Utah on February 23, 1993, Bryce was the son of Dennis M. and Robin M. (Geer) Barretta. In 1998 his family returned to New Hartford to raise their family and Bryce went on to graduate from New Hartford High School. He played on Little League and Minor League baseball teams, and participated in All-Star games where his mom and dad were always in the stands rooting for him. ​Bryce worked as a restaurant cook at the Creekside Cafe, Outback Steak House, and lastly, the Irish Cultural Center, a vocation that was his passion. Bryce was a feisty young man because he had two older brothers that brought that on, yet, he could hold his own. A first impression of Bryce was often that he was quiet, but when he opened up to you, you had his heart and knew that he would do anything for anyone. He was a great son to both parents, and with his older brothers he would fight for the last bite. He was a late-night guy and a late riser, and he could make the best full course breakfast anyone could wish for. He knew different cuts and the quality of meat; in the summer he prepared it on the grill, and in the winter he cooked them on a grill pan on the stove. He was masterful at preparing a piece of meat to perfection. He was also an Xbox aficionado. Bryce had his sports dreams come true: He watched his team play at Yankee Stadium, and he saw McGregor compete in the mixed martial arts Ultimate Fighting Championship at Madison Square Garden. We always hope for a longer life, and although Bryce’s was short on this earth, it was truly meaningful to those who loved him. ​Bryce is survived by his parents, Robin and Joseph Felski, Jr., and Dennis and Wendy Pickens; and his brothers, Brandon Barretta, and Brian Barretta. He will also be remembered by his aunts and uncles, Melodie Lincowski, Lorna and Cliff Woodworth, Frank Barretta, Jackie Barretta, and Carmen Barretta; his numerous cousins; and the many good friends and co-workers who blessed his life. He was predeceased by his paternal grandfather, Frank A. Barretta; maternal grandparents, Curtis and Mary Geer; aunt, Mary Barretta; and uncle, Raymond Barretta. ​The family extends heartfelt appreciation to MVHS at St. Elizabeth Medical Center as “they were Mom’s eyes and watched over Bryce with care”, and case worker Karen Mower for her kindness and dedication. Robin also wishes to thank her co-workers at the DDS at Oneida County Office Building, for their solace and support. ​Visitation will be held Tuesday, February 23, 2021, on the occasion of his birthday, from 4:30-5:30 p.m. at the Eannace Funeral Home, Inc., 932 South St., corner of Hammond Ave. Bryce’s funeral service and Celebration of Life will commence on Tuesday evening at the funeral home immediately upon the conclusion of visitation. Face masks are required and social distancing and contact tracing will be implemented. Burial will take place in Calvary Cemetery at the convenience of the family. ​ During this time of social distancing that we are all experiencing, please take a moment to connect with Bryce’s family through the “Memories” section of his obituary. Our prayers go out to all as a sign of our continued support.

The family of Bryce A. “Dude” Barretta created this Life Tributes page to make it easy to share your memories.

Send flowers to the Barretta family.