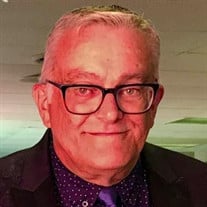 SYRACUSE - Mr. Bryan L. Ransiear, age 61, passed away after a long illness on Sunday, April 10, 2022, in the comfort of his home. Bryan was born in Lowville on July 6, 1960, to the late Charles and Ethel (Greene) Ransiear. He was a graduate of Lowville Academy and Central School/Class of 1978. From there Bryan went on to graduate from Herkimer County Community College where he majored in Radio and Television Broadcasting. On September 24, 1983, Bryan married the former Denise Carchedi. The couple was blessed with a son. Bryan enjoyed a prolific career in his favored field; landing his first positions in radio as a disc jockey on the airwaves for several radio stations in Central New York. After that, he shifted into the position he held the longest: an on-air Traffic and Production Manager with WSEN in Baldwinsville. This role helped Bryan transition into television, where he became a Content Principal Manager and Supervisor of Master Control. Bryan was incredibly funny with a dry sense of humor, and boasted an extensive knowledge of music. All genres entertained him, with some of his favorites being the surf music of the Beach Boys, and Jan and Dean. Bryan had the uncanny ability to be able to hear a song and then immediately name it and the artist. He could do the same with classic movies and television. It was as if he had an encyclopedia of music and pop culture in his head. Bryan had many fond memories of sharing time with his son. They spent many years attending hockey games and sharing in their love of music. Bryan’s favorite TV show was “The Simpsons” (he knew all the quotes), while his favorites movies included “American Graffiti” and “That Thing You Do!” In his earlier years, Bryan was a NASCAR fan and enjoyed attending races each year with his wife Denise. He was also a spectator of the national races on television. He developed a love of the Syracuse Crunch hockey team and held season tickets for several years. Bryan had an affinity for dogs, particularly his beagle, shepherd, and terrier. Moreover, it was important to Bryan to support local rescue shelters. He was quite the dog-whisperer—he could walk up and pet any dog. His son, now a dog owner, was proud of his dad’s choice to adopt from shelters and did so himself. Bryan is survived by his wife, Denise; his son, Steven Ransiear; and his sister and brother-in-law, Donna and John Kozick. He was preceded by his brother, Alan Ransiear. Bryan will live on in the hearts of his nieces and nephews, Charles and Kristin Ransiear; he was preceded by his nephew, Todd Ransiear, who passed in infancy; Zachary and Hui Woon Tan Kozick, Alyssa Kozick and fiancée Corey Cenate; Mark, and Katherine Laible; Hayley and Vincent Carchedi; several cousins and his godson, Dylan Winchester, with whom Bryan was so proud to share such a special relationship. Bryan leaves behind his in-laws, Barbara and Donald Laible, J. Mark and Charisse Carchedi; and was preceded by his brother-in-law, Michael Carchedi, as well as his father-in-law and motherin-law, Anthony and Josephine Carchedi. Bryan was a true blessing to many, and shared a special friendship with his long-time coworker, Kristine Gladle. In keeping with Bryan’s wishes, services will be held privately. Those who wish to make a donation in honor of Bryan’s memory may do so to Helping Hounds Dog Rescue of N. Syracuse, online at https://www.helpinghoundsdogrescue.org/donate.

SYRACUSE - Mr. Bryan L. Ransiear, age 61, passed away after a long illness on Sunday, April 10, 2022, in the comfort of his home. Bryan was born in Lowville on July 6, 1960, to the late Charles and Ethel (Greene) Ransiear. He was a graduate... View Obituary & Service Information

The family of Mr. Bryan L. Ransiear created this Life Tributes page to make it easy to share your memories.

Send flowers to the Ransiear family.