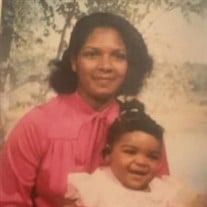 UTICA – Brenda L. Griffin, age 64, passed away in the comfort and dignity of her home on Friday, May 6, 2022 and is now at peace with her mother and father. Brenda was born in West Palm Beach, FL, on September 11, 1957, to the late William “Bo” and Beverly (Hill) Griffin. She relocated as a young lady to Utica, attended Kernan Elementary and graduated from Utica Free Academy. Brenda then continued her academic pursuits by studying Criminal Justice at MVCC. Brenda enjoyed a prolific caregiver career as a CNA at several geriatric care institutions around Utica: Broad Acres Nursing Home, The Hunter House, and Eden Park. Brenda worked tirelessly and was known for being dedicated to the residents under her watch. A woman who knew her own feelings about life, she never hesitated in sharing her thoughts on a matter or how she felt about something. She said it exactly the way it was. She was a strong, independent, single Mom who considered her family her matter of greatest importance. Truly a Mama Bear, Brenda taught her children how to defend their rights amidst sharing many other wise words, which were most often correct! Brenda could fix any wound or scratch—physical or emotional—that her children suffered. She harbored a deep well of motherly love and instincts. Furthermore, she was always able to offer an olive branch to anyone in need. Those who knew Brenda admired her and will remember her for all of her kindness. She had a multiracial family, which she would often liken to the United Nations. Because of this, they were open-minded to all souls and accepting of all people’s beliefs. A determined woman, once she set her mind to something, she would always finish it; nothing was ever left undone! Cooking was her passion, and she put her heart and soul into whatever she made. In fact, she was known as the “Queen” of potato salad and could prepare a soul food buffet like no other. In retrospect, because Brenda was mindful of the foods her children ate when they were young, they recall rarely having any childhood illnesses. Her constant and abundant providing meant that her kids never knew if she had the means to provide or not—she preserved them from any worries. A single mom of four, Brenda had harnessed her organizational skills and her quest for excellence—even in her early 20s—to gain her degree and keep her house in order. She was an avid fan of Law and Order, and the show ruled in her house. She also branched out to watching other law shows and loved to be the first to shout out “What is______?” when watching Jeopardy! She was excellent with these mind-challenging games and was even unbeatable at Scrabble. Additionally, she enjoyed the card game, Spades, and would often play it at card nights with the girls. Brenda would sometimes get lucky at games of chance and Bingo, another way in which God blessed her. She had a vast variety of interests, and she was graced with intelligence that was amazing. Brenda’s Mama Bear nature extended to her grandchildren; when they arrived on the scene, her inner lioness came out in many protective ways. Looking back, her children remember how her youthful energy gave her an advantage as a mom. She had beauty and grace, living by the motto: “You may not have everything you want, but you have everything you need.” Brenda would remain close to her children throughout her life and desired input into their lives as they became parents. She often offered “free” relationship advice and still asked for the respect demanded from all—“You only have one mother!” As time passed, her feisty and spunky spirit, which always was directed towards the betterment of her family, increasingly came out. A prayerful woman, Brenda trusted that God had a plan for all. She is survived by her beloved children and their loves, Tomoo Brown-Harrison and her husband Shorron, Rosheen Brown and fiancée, Crystal Gallardo, Martinique and Todd Manolescu, and Shameel Preston and fiancée, Damion Colclough. She will live on in the hearts of her grandchildren, Shamar, Ta’Shuan, Kiami, and Emaje; Justin, Jenovicia, Rosheen, Jr., Kaeden, and Nálina; Shakur, Onnayza, Todd, Jr., and Ta’Naiya; Tajionna, Da’Mair, Anastasia, Galen, Treyvone, Omareon, Sincara, and Akeelah. Brenda was blessed to know her great-grandchildren, Kensington, Nyela, Nariyah, Ishmeal, and Maxine. She will be fondly remembered by her sister, Carolyn Griffin; and her brother, William Griffin III. Brenda also leaves behind a host of nieces; nephews; great-nieces; great-nephews; cousins, including Bonnie and Ann; and aunts, including Marion. Visitation will commence on Friday, May 13, 2022, from 11:00 a.m. to 12:00 p.m. at the Eannace Funeral Home, Inc., 932 South St., corner of Hammond Ave. Brenda’s Celebration of Life and Funeral Service will be at 12:00 noon at the conclusion of visitation.

The family of Brenda L. Griffin created this Life Tributes page to make it easy to share your memories.

Send flowers to the Griffin family.