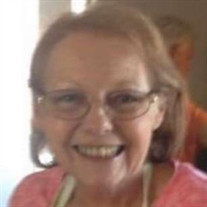 CLINTON - Mrs. Bolita (LaClair) Schorer, age 73, went home to the Lord when she passed away on Friday, January 31, 2020 with her loving family by her side. Born in Ellenburg, New York on October 11, 1946, Bolita was the daughter of the late Maynard W. Sr. and Eva M. (Harris) LaClair. As a young girl, she and her family came to East Utica and made it their home. She attended Wetmore Elementary School and T.R. Proctor High School. In June of 1967 she married Frank J. Gaeta with whom she shared 18 years and the blessing of three daughters prior to his untimely passing on August 18, 1985. She found love once again and on July 1, 1988 she wed Gary K. Schorer. Their union blessed her with a fourth daughter. They were well-matched mates during their 31 years together and shared commonalities when it came to their family. Bolita alternately balanced several passions in her life that allowed her to venture into two different livelihoods. She worked as a self-employed seamstress, a profession which began with her position at Joseph & Feiss Company. Her business acumen and creativity in her craft led to her owning and operating multiple sites for her enterprise, Bolita's Alterations & Tailoring, in Washington Mills, and on Oriskany Boulevard in Whitesboro. She then pursued her equally fulfilling life work when she opened The Pizza Cafe in Center Court at the New Hartford Shopping Center where everything she made was from scratch! Her creations were spot-on and savory, prepared to perfection in ingredients, portion, and taste. Her baked goods were also made available at the Pizzeria; it was a memorable family affair. Bolita’s benevolence was seen not only in her cooking but also in caring for her patrons. In 2003 she worked alongside Jeff Daniels at Daniele Imports where a lot of fun and hard work went into their masterful creations. She subsequently returned to her alterations profession, rendering her services for local stores. Lastly, she served as a cook at Bon Appétit, Hamilton College's catering service, the position from which she retired. Bolita’s work ethic flourished from a young age as she worked at her family farm. She conveyed that virtue to her children, a gift of which they are very proud and appreciative. She was kind-hearted and selfless in so many ways, she made holiday gatherings and parties memorable, from preparing, to entertaining, to cleaning up! Her baked goods were spectacular and detailed and were always the hit of any event. Though she could be strong-willed and demonstrative, she was sincere in sharing her well-wishes, wisdom, and wit. Her leisure interests included golf, snowmobiling, boating, camping, and ceramics. Her handcrafted creations were natural and intuitive, including the clothing she sewed for her children, costumes for all occasions, and evening, wedding, and baptismal gowns. Bolita practiced her Catholic faith at her home parish, St. Anthony & St. Agnes Church. Bolita’s entire family honored her with love, respect, and a lifetime of beautiful memories. Each of her loved ones experienced her love equally, and her grandchildren were the “extras” that lit up her eyes and uplifted her later years. They were a blessing, and being together as a family gave her the greatest pleasure of all. Bolita is survived by her husband, Gary; her daughters and son-in-laws, Gina and Gary F. Elsenbeck II, Claudette and Thomas Davidson, MaryJo and Christopher Smith, and Katelyn and Trevor Pratt. Grandchildren, Bryanna and Noah Lupini, Isabel Elsenbeck; Michael and Cadence Davidson, Starrlynn Lonero and Quinntin James Smith. She held close to her heart the memory of her infant granddaughter, Mackenzie IV Reign Smith who preceded her on December 14, 2012. She also leaves her siblings and their spouses, Andrea Aurigema, Jacklyn and Patrick “Pat” Gurdo, Maynard Jr. “Ricky” and Linda LaClair, Karen Arrigo and Christine and Gary Artessa; nieces, nephews, great-nieces, great-nephews, cousins, and many cherished friendships that she made throughout the years. She was predeceased by her brother-in-laws, Frank “Sham” Aurigema, and Frank Arrigo, Sr. The family is grateful to Dr. Hamerton Jeanty at MVHS at Faxton-St. Luke’s for his compassionate, gentle guidance; and the nurses and staff of the ICU for their sensitivity and dignity in caring for Bolita. Visitation will be held Wednesday from 4:00-7:00 at the Eannace Funeral Home, Inc., 932 South St., corner of Hammond Ave. Expressions of sympathy in the form of donations may be directed to the American Lung Association online at https://www.lung.org. Envelopes will be available at the funeral home. Bolita’s funeral service and Celebration of Life will commence on Thursday morning at 10:00 from the funeral home and at 11:00 at St. Anthony & St. Agnes Church where her Mass of Christian Burial will be offered. Interment will follow graveside at St. Agnes Cemetery.

CLINTON - Mrs. Bolita (LaClair) Schorer, age 73, went home to the Lord when she passed away on Friday, January 31, 2020 with her loving family by her side. Born in Ellenburg, New York on October 11, 1946, Bolita was the daughter of the late... View Obituary & Service Information

The family of Mrs. Bolita (LaClair) Schorer created this Life Tributes page to make it easy to share your memories.

Send flowers to the Schorer family.