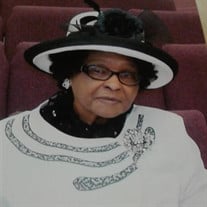 UTICA - Mrs. Bessie Ruth (Smith) Steele Bowens, age 89, was glorified as she transitioned to glory on Friday, May 15, 2020 with those she loved most in her heart. Born in Elba, Alabama on August 30, 1930, Bessie was the youngest daughter of... View Obituary & Service Information

The family of Mrs. Bessie Ruth (Smith) Steele Bowens created this Life Tributes page to make it easy to share your memories.