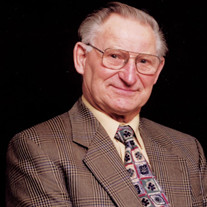 SAUQUOIT - Mr. Bertram “Bert” Barter, age 90, was reunited with loved ones who went before him, when he passed away on Sunday, February 28, 2021. Born in Totton, England on September 17, 1930, Bertram was the son of the late Percy James and Gladys (Peckham) Barter. He graduated from South Hampton Technical College earning a degree in Building. Bert was proud to have served in the British Army from 1950 - 1952 stationed in Korea and Japan. As a true patriot, protecting his country with honor was a worthy accomplishment. He was proud of his British heritage, and he was true to the Crown. Bert made his home in Southampton, England where he began his career as a mason and contractor. He lived a grand life, worked hard at his profession, and cultivated vegetable and floral gardens. On March 17, 1955 he married the former Jean Hayer, a union blessed with a son, Christopher. He shared 31 years with Jean prior to her passing on St. Valentine’s Day, February 14, 1986. In 1987, in a Bed & Breakfast in Tirol, Austria, during the season of Almabtrieb, an end of summer festival where the cows come home from the Alps, Bert met Joanne Ingalls-Bick. From that day forward, they corresponded by letter and visited each other periodically, and on January 1, 1994, in a Nuptial Mass, they exchanged their wedding vows. They resided in England for a period of time and eventually returned to Sauquoit, to the family homestead. A gentleman and man of merit, Bert cared for Joanne with great compassion until her passing on October 14, 2018. Strong-willed and determined, Bert knew how to mitigate morosity; a ‘pint of ginne’ with juniper berries and aromatics mellowed him out. He loved traveling, tinkering, transforming, rigging, and fixing things, and taking part in family card games! He enjoyed time with his grandchildren, caring for them and filling their days with fun, most memorably picking apples “at the farm”. Bert was a very active member of the Sauquoit Senior Center, currently serving as the Treasurer. He was organized and wanted to be an integral part of the organization. The Casino was a ‘hot spot’ for him, particularly “Senior Night” Wednesdays, playing the Peacock Slots, his favorite. Bert was easy to please when it came to cuisine, with Chinese food a favorite. His personal spirituality as an Anglican in the Church of England coincided with Joanne’s love for Catholicism and made for a great spiritual symbiosis between them as their respective beliefs shared common doctrines and rituals, and Bert was a practicing Catholic. Because Bert coveted his independence, he remained home, cared for himself, and called the shots for his life, …to the very end. Bert will be remembered by his family, Christopher and Deborah Barter; Margaretta “Greta” and Jerry Newell, and Eileen and Stephen Linkiewicz, and Brother Edward John Bick, topsf; his grandchildren, Bradley Barter, Craig Barter; Tony and Kelly Newell, Ty Newell and granddoggie, Emma; Rebecca Linkiewicz, Erin Linkiewicz and fiancé Mac Brooks; great-grandchildren, Maddison, Tanner, and Dakota Newell; and his sister, Marguerite Noyce. He also leaves many nieces, nephews, great-nieces, great-nephews, cousins; sister-in-law, Jessie Fiorini; friends and neighbors, Ken, Barb and Dick who cared for Bert in many special ways, and the family will remain grateful for their concern and good deeds. He was predeceased by his brother and sister-in-law, James “Jim” George and Jean Barter. The family is grateful to the staff of Hospice & Palliative Care, Inc. who were a godsend; Dr. George Tomy, and Dr. John Kane of Roswell Park for their medical expertise and guidance; the Sauquoit Valley EMTs for their kindness and empathetic care; and the personnel at the Siegenthaler Center who were so welcoming and gracious to Bert during his short stay. Relatives and friends are respectfully invited to attend Bertram’s funeral service and Celebration of Life which will commence on Friday morning, March 19, 2021 at 11:00 at St. Joseph & St. Patrick Church, 702 Columbia St., Utica, where his Memorial Mass of Christian Burial will be offered. In lieu of flowers, please consider donations in Bert’s memory to Hospice & Palliative Care, Inc. online at https://hospicecareinc.org or Mother Marianne’s West Side Kitchen at St. Joseph & St. Patrick Church online at https://mmwsk.org,; envelopes will also be available at the service. Graveside Inurnment in Mt. Olivet Cemetery will take place at the convenience of the family. Arrangements have been entrusted to the Eannace Funeral Home, Inc., 932 South St., corner of Hammond Ave. During this time of social distancing that we are all experiencing, please take a moment to connect with Bert’s family through the “Memories” section of his obituary. Our prayers go out to all as a sign of our continued support.

The family of Mr. Bertram "Bert" Barter created this Life Tributes page to make it easy to share your memories.

Send flowers to the Barter family.