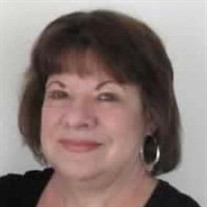 NEW HARTFORD – Mrs. Barbara A. (Tice) Keyes, age 75, passed away unexpectedly Saturday morning, November 27, 2021, in the comfort and dignity of her home and with those she loved most in her heart. Born in Utica on October 24, 1946, Barbara was raised locally by her late mother, Rose M. (Vedette) Tice. She attended St. Mary of Mt. Carmel Grammar School and graduated from St. Franics DeSales High School, before she earned her Bachelor of Arts in Education at Utica College of Syracuse University. Additionally, Barbara was able to continue her studies towards her master’s degree. Her passionate heart - the heart of an educator – would pave the path from her studies to her career. A loving and dedicated woman, Barbara married Edward J. Keyes, Jr. on July 31, 1976. The couple shared a close relationship, and wonderfully exemplified true companionship in their life journey of 45 years. Barbara knew she was blessed with a great husband, and she held an abundance of love for him and their daughter; this love would be multiplied by the addition of her son-in-law and, later, her grandchildren. As a mom, Barbara instilled strength and core values into the life of her daughter. Barbara’s magnanimity filled her family with love, as well as enabled her to succeed in her caretaking career. Generosity, kindness, and compassion were virtues and skills that Barbara possessed. Beginning in 1968, she taught at Conkling Elementary School, and afterwards, she accepted a new position at Hugh R. Jones Elementary School. Barbara absolutely loved her students; teaching was her true calling. She was known for planning special days for the students – days that grew into dear memories, such as “Penguin Day.” Barbara was exemplary, and her colleagues honored her as such by nominating her as “Teacher of the Year” in 1974. This was a proud moment for Barbara, and one she humbly accepted. When she finally retired in 2007, Barbara chose to continue sharing her skills by partaking in activities, programs, and engaged in tutoring students within this community. Barbara was furthermore known as a woman of grace; she had class and dignity and carried herself well. Barbara was also stylish. She was always well-attired, and her shoe wear was important to her and had a unique style. Barbara cherished being surrounded by people she appreciated, and her endless affection she held for many. She possessed a cheerful and bright personality, and she was admired by many for her determination. Known for her mental and physical endurance, Barbara was able to accomplish numerous tasks in a single day. She was dedicated to improving their home, which was her pride and joy, and she did much of the work herself. Barbara was also a bountiful cook, who would make such an abundance of food, that there were intended leftovers to go around – and her choice of foods was memorably of Italian cuisine. Moreover, Barbara was generous with her hobbies. In particular, she enjoyed knitting and would create treasures to gift others that were specific to the recipients’ choices. Today, many privileged loved ones cherish these gems that she bestowed them. Barbara leaves behind a legacy of memories; she consistently supported her daughter’s decisions, and as a “Nonnie”, traveled to spend time with her grandchildren. There were countless fun times, when Barbara enriched the grandchildren’s lives by spending that quality time with them and imparting her wisdom. She furthermore bolstered the family’s time together during the holidays by decorating with a great and unique flair! Barbara held such loving pride for each of her dear ones, and none in her family went untouched by her capacity for cherishing them. Barbara possessed a faith-filled heart and followed her Catholic beliefs. Barbara will remain in the hearts of her husband “Keysie,” as well as her cherished daughter Diana Johnson and her husband Andrew, whom Barbara loved as her own son. She will be a legacy to her grandchildren, Evan, and Mira Johnson. Barbara is predeceased by her brother Harold Tice. She is survived by her niece Jessica Pray and her husband Jared, and their children Kylie, Mackenzie, and Keira; her cousins including Elaine and Ralph Polito and their children Mary Margaret, and Joe; and her sister-in-law Susan Tice and Ed Troha; and sister-in-law Gloria and David Reynolds, and their children Linda, Karen, and Michael. Barbara was blessed with wonderful neighbors, beloved friends, and fellow educators, who will all carry her in their hearts. She is predeceased by several uncles and aunts, especially Mary and Michael Cristalli; and Carol and Bill Fiore; as well as her cousins Michael Cristalli; Dr. William Fiore; and Richard Fiore. A Memorial Gathering in Barbara’s honor will be held on Thursday, April 14, 2022 from 5:30-6:30 at the Eannace Funeral Home, Inc., 932 South St., corner of Hammond Ave. Barbara’s Memorial Service and Celebration of Life will commence at 6:30 at the funeral home. Memorial contributions in Barbara’s honor may be made to the New Hartford Fire Department online at http://www.nhfd.com/donate; envelopes will be available at the funeral home.

NEW HARTFORD &#8211; Mrs. Barbara A. (Tice) Keyes, age 75, passed away unexpectedly Saturday morning, November 27, 2021, in the comfort and dignity of her home and with those she loved most in her heart. Born in Utica on October 24, 1946,... View Obituary & Service Information

The family of Mrs. Barbara A. (Tice) Keyes created this Life Tributes page to make it easy to share your memories.