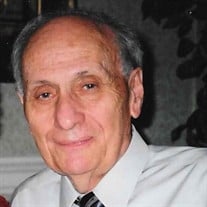 NORTH UTICA - Mr. Attilio F. “Til” Cucci, age 97, passed to his Lord on Sunday, June 21, 2020 with his family by his side, and when he crossed over, he was reunited with his parents, sister, and grandson Michael who welcomed him with love and open arms. Born in Utica on March 11, 1923, Attilio was the son of the late Frank A. and Virginia (Inserra) Cucci. He attended Conkling Elementary School and was a graduate of T.R. Proctor High School/Class of 1942. A member of the Greatest Generation, Til was a proud veteran of World War II and honorably served his country in the United States Army with the 472nd Quartermaster Truck Regiment stationed in the China-Burma-India Theater of Operations. He was among the first convoy of trucks traversing the Burma Road, the overland supply route from India to China. He was awarded numerous Medals of Honor for good conduct. On April 29, 1950, at St. Anthony of Padua Church, he married the former Marie J. Bernardi. They were a dedicated couple for 70 years. She married a hard worker and a good provider, …they loved each other to the very end. Til was employed by the American Emblem Company, and in 1957 he began working at General Electric at the Bleecker St. location as a Stock Keeper for the staff. When GE downsized he transferred to the Radio/Receiver Department where he worked until his retirement. Til had a passion for photography, an art he inherited from his father. For years, he captured on film forever-treasured moments of weddings, Confirmations, and First Holy Communions. Till held many roles in his life; he was his daughter’s protector, and the bond they shared was unbreakable; he was an engaging father, and he and Marie always had the kids with them; and he was an open and honest communicator with his sons. Although he was a man of few words, he set an example through the way he lived and the wisdom he accrued over his 97 years. He was a rock to his family, and even when his parents were aging, he was steadfast in standing ready to help them. Til was always the organizer and photographer of all family get-togethers and reunions. Through his affiliation with the CBI/China-Burma-India Veterans Association, Til and Marie faithfully attended the annual conventions and traveled to great destinations. They were enchanted when they travelled to Italy, and to Hawaii on their 40th wedding anniversary. Til enjoyed the hobbies of stamp collecting and playing the Take 5, of which he was always awaiting his big pay out. He followed the New York Mets and was a big fan, an exception to the usual N.Y. rule! A man blessed with leadership skills, he was civic and socially minded, and his wife always referred to him as the “meeting man” because he never missed a scheduled event or responsibility. Til took action, participated in, and believed in the groups he held membership in; the Tau Phi Zeta Fraternity, of which he was the Corresponding Secretary for over 60 years; the Oneida County Republican Committee; his service as a North Utica Committeeman; IAM (International Association of Machinists) where he served as Secretary; the Veterans of Foreign Wars (VFW) Ft. Schuyler Post, and the American Legion Post #229. Attilio was baptized in the Catholic Church, and shared a personal relationship with his Lord. He was a parishioner of St. Anthony & St. Agnes Church and participated in and supported parish events. He was grateful that God granted him a family who adored, respected, and honored him throughout his life, as his positions in life expanded from husband, to father, to grandpa and poppie. They were the greatest blessings of his life. Attilio is survived by his sweetheart, Marie; his children and their loves, Marlene A. Duniec and Peter Duniec Jr., Frank S. Cucci and Toni Costello, and Richard M. Cucci and Frances (Maggiore) Laufer; grandchildren, Peter A. III and Jennifer Duniec, the cherished memory of his grandson Michael Frank Duniec who passed on November 11, 2005; Angela and Jason Rice, and twins Anne Marie (and her husband Luke Haumesser), Anthony Cucci (and Anna Dussing), and Matthew Laufer and Francesca Laufer; great-grandchildren, Mikaela Jayne, and Tyler; Thomas, and Lucas; and his sister, Palmina “Polly” Brock. He also leaves his nieces, nephews, great-nieces, great-nephews, cousins, brother-in-law Richard F. Lupi; and friends with whom he enjoyed life, shared fun times, and traveled, Jane Doti (late Rock), Marie Bell (late Cosmo), and many couple friends who preceded him. He was predeceased by his sister, Rosella C. Lupi; in-laws, James G. “Jim” Brock Sr., and Antoinette and Rocco “Doc” Zito; and brother-in-law, Pasquale Bernardi. The family is grateful to the staff of the Masonic Care Community/Rehabilitation Troy Household, and the Woodgate Household for their fantastic care, compassion, and concern for Attilio, especially during these past three months. They were very much trusted to watch over him. Memorial donations in Attilio’s honor may be directed to the Central NY Chapter #490 Military Order of the Purple Heart online at https://www.purpleheart.org/donate/ or by mail to CNY Chapter 490 MOPH, P.O. Box 4491, Utica, NY 13504-4491. Visitation will be held on Tuesday morning from 10:15-11:15 at St. Anthony & St. Agnes Church. Taps Our Duty will be present to honor Til’s military service. Relatives and friends are respectfully invited to attend Attilio’s funeral service and Celebration of Life which will commence on Tuesday morning at 11:30 immediately upon the conclusion of visitation at the church where his Mass of Christian Burial will be celebrated. Face masks must be worn and contact tracing will be implemented. Interment will take place in Calvary Cemetery.

The family of Mr. Attilio F. "Til" Cucci created this Life Tributes page to make it easy to share your memories.

Send flowers to the Cucci family.