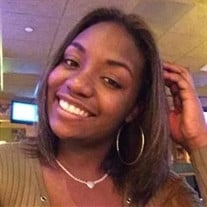 UTICA – Ashante Dorothy Mae “Booka” Smallwood, at the tender age of 25, went home to the Lord and was reunited with her mom on Sunday, March 13, 2022. During the final portion of Ashante’s journey, she was under Hospice care and it was there that her dad spent each night with her, and her siblings and family never allowed her to be alone which was of the greatest comfort. Ashante was born in Brooklyn on January 9, 1997, to Douglas “Moon” Belton and the late Tanya Smallwood. In her early years, Ashante relocated to Utica with her family. Ashante attended Sacred Heart Elementary School, Watson Williams Elementary, Donovan Middle School, and was a graduate of T.R. Proctor High School. It was during her years at Proctor that she worked hard at being an outstanding basketball and softball player, an endeavor she worked with great integrity. From there, Ashante proceeded to MVCC, where she focused her efforts on studying Criminal Justice. Ashante shared in a loving relationship with her childhood sweetheart and the father of her daughter, Jaron Brown. The couple had a good relationship filled with mutual love for each other. Moreover, Ashante appreciated Jaron for being a great dad for their little girl Alianna, who was truly Mommy’s and Daddy’s little girl. A hard worker, Ashante had gained several employment opportunities. She first held a position as a Customer Service Representative for AAA, and then she went to accept a position with AT&T in their Customer Service department. She was lastly employed at Walmart, where she held several Associate positions. In each role she undertook, Ashante shone as a dedicated employee. However, she always maintained that her best and truest calling was being a mom to her daughter. A strong and determined young woman, Ashante rocked the world around her with her boundless optimism. She did whatever it took to approach life and live it in the best, most fulfilling way. As a daughter, Booka was always encouraging her dad and making sure he got through the day surrounded by her love and affection. She was a reasonable child who never gave her dad cause to worry. She also shared family life with her brothers and to them, Ashante was their “sweetheart” – their little sister and an adored baby girl. Ashante then had three sisters, whom she kept close in her heart. She would always miss her mom, who was tragically absent in her life; whenever Ashante spoke of her late mother, her words revealed a great fondness. They had been so close, and her mom had been so protective of Ashante – the two had shared an incredible bond. As a young mom herself, Ashante was compassionate and went above and beyond to provide for her precious little girl. She opened her heart to its fullest and loved her daughter with all she had. When she became ill, Ashante grew concerned for her daughter’s wellbeing and for who would raise her “Tinky,” but her Dad and family comforted her by assuring her that “they had this!” For fun, Ashante enjoyed shopping. She liked nice clothing and shoes and would treat herself to salon trips for manicures and pedicures. Looking her best was important to her. Additionally, she was known for “eating good,” and could put away any of her favorites: chicken, burgers, pizza, wings, and lasagna. She didn’t pass up too much! Ashante knew Jesus and kept her faith until the very end. Ashante is survived by her daughter, Alianna “Tinky” and Alianna’s father, Jaron Brown; her adoring father, Doug Belton; as well as by her paternal grandparents, Marcquis Hardy and Oralee Belton. She will live on in the hearts of her siblings, Quindell Smallwood, Shamel Gilmore, Taurean Belton, Jarvis Belton, Jordan Moore, Douglas Belton, Jr., Drayton Belton, Ashanie Smallwood, Nylah Belton, Destiny Alexander, and Devonte Belton. Ashante also leaves behind two nephews, Dysean Flowers, and Shamel Gilmore, Jr.; a niece, Melanie Gilmore; and a host of aunts, and uncles especially Uncle JuJu who played a major role in her life, great-aunts, great-uncles, and special cousins including Starmecca Belton who was like a sister to her. Ashante had the recipe for being a great friend: a good listener, a great talker, and giving of all parts of her heart to her dear friends who were with her to the very end: Chan, Dana, Hadia, Nae, and Oreo. She was predeceased by her maternal grandparents, Julius Henry Petty and Dorothy Mae Smallwood, as well as Evelyn Smallwood. The family would like to extend a “thank you” to Dr. Varun Reddy, the Upstate Medical Center surgeon who was incredible and supportive, giving her family hope and courage. They would also like to extend their gratitude to Sunnyview Rehabilitation Center, where the family’s personal concerns were met with attention and affection; to Dr. Mijung Lee at Oneida Cancer Center; those who attended to her at Upstate Medical Center; to the Siegenthaler Center Hospice and Palliative Care staffs, who made Ashante’s final journey more comfortable and who, by allowing the family to be by her side, helped make it all more pleasant for Ashante and put her at ease. Visitation will be held on Monday from 10:00 to 12:00 noon at the Eannace Funeral Home, Inc., 932 South St., corner of Hammond Ave. Ashante’s Home Going Service and Celebration of Life will commence at 12:00 upon conclusion of visitation with entombment to take place at Christ Our Savior Mausoleum at Calvary Cemetery.

The family of Ashante Dorothy Mae "Booka" Smallwood created this Life Tributes page to make it easy to share your memories.

Send flowers to the Smallwood family.