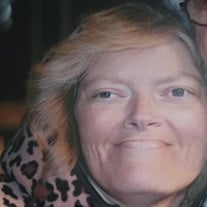 UTICA – April Y. Sinclair, age 58, went home to be with the Lord on Saturday, April 2, 2022, with those she loved most in her heart. April was born in Utica on February 12, 1964, to the late Harry, Sr. and Elpha (Penner) Sinclair. She attended Conkling Elementary and Utica Free Academy. April shared in a loving relationship with Roger Haylette, they were the best of friends. The two complemented each other beautifully—they were such great companions that where people saw one, they would also always see the other. April enjoyed a focused career in her role at ConMed Corporation, where she worked assembling medical supplies. A happy and outgoing gal, April was very active and is remembered for her incredible smile. Those who knew her were grateful for her constant generosity, as she was consistently very thoughtful of others. April watched over her great-niece Nicolette, with whom she shared a special bond. The niece-aunt duo gently and joyfully embraced each other’s lives. Any time spent together was truly fulfilling quality time for both. And although the time was less than April would have liked, it was precious. Additionally, she deeply loved her great-nieces and great-nephews, including Katlyn and her wife Amberlyn, and Bruce. April really prioritized her family and always wanted to be part of the important events in their lives. Although April was not always in the best of health, this didn’t stop her from valiantly fighting for her independence. She humbly accepted help and assistance so that she could live a full life. Although difficult, she would ride the bus to WalMart and was even known to ride her scooter to Fastrac, often accompanied by other residents from her apartment complex. Another exciting pastime April enjoyed was Bingo. Together with Roger, the two were the set up team for Bingo gatherings and everyone appreciated their coordinating efforts. A faithful woman, April attended the Ashbury United Methodist Church, where she worshipped among many friends. April is survived by her life partner, Roger; her sister, Jennifer Jewett and her late husband Frank,. April always kept close to her heart the memories of her brothers, Mark E. Sinclair, Sr. (2017); and Harry (2006). April leaves behind a host of nieces, nephews, great-nieces, great-nephews, and cousins. She shared in a wonderful relationship with her dear friend Alice, who resided at the Margaret M. Knamm Memorial Apartments. The family would like to extend their gratitude to the physicians, especially Dr. Green, and the ICU staff of Upstate Medical University Hospital for the exceptional care they provided and for making April’s stays there as pleasant as possible. The family would also like to thank the Faxton-St. Luke’s Dialysis Unit, as they were so kind and gracious. A Memorial Gathering in April’s honor will take place on Sunday, April 10, 2022, from 3:00 - 4:00 pm at the Eannace Funeral Home, Inc., 932 South St., corner of Hammond Ave. April’s Memorial Service and Celebration of Life will follow at 4:00 at the funeral home.

The family of April Y. Sinclair created this Life Tributes page to make it easy to share your memories.

Send flowers to the Sinclair family.