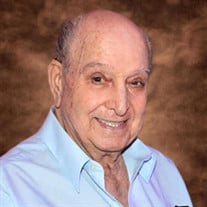 FLORIDA/BARNEVELD - Mr. Antonio “Anthony” Leone, Sr., age 91, passed peacefully on Friday, April 16, 2021 with those he loved most in his heart and by his side. Born in Utica on February 23, 1930, Antonio was the beloved son of the late Pasquale “Patsy” Sr. and Fortunata “Florence” (Rocco) Leone. He received his general studies in Utica schools. On November 25, 1954 he married the former Dorothy May LoNero with whom he shared 46 years. He was crazy about his true love, and they complimented each other in so many wonderful ways. The most beautiful woman who blessed him with five children was called home on June 27, 2001. Anthony was the owner and operator of Anthony Leone & Sons Livestock, a business that was his dad’s concern. From a young age, Anthony went out to the country and grew his wisdom. He had a charismatic personality which was the foundation for his success in the business; his sons evolved in the operation from his grooming. After devoting almost 70 years to the business, which was an amazing accomplishment, he retired in 2002. A patriarch and protector, Anthony loved unconditionally. As a dad, he was a supportive, caring, and hands-on father. He always wanted to please his children and his great smile was his sign of approval. He was gifted in creative humor, one-liners, zingers, wit, and “Tony-isms”. He was a gentleman, a man’s man, and he had a compassionate heart which led him to be a mentor and family figure to many. His family bond was unshakeable, and his hand in yours made you feel safe and warm. He was blessed with 91 years of life and he wouldn’t have changed a thing about it! Please celebrate your memory of Anthony the way he wanted his life to be celebrated ~ with joy! Anthony loved being at home when he finished work at week’s end, with his kids and grandkids. Sundays were spent with extended family, gathering at his beautiful ranch, sharing in fun and laughter. He also loved a good meal, and when he was having breakfast, he was already talking about dinner! He had a special preference for produce and he insisted on making his own selections. After his wife’s passing, he started to travel to Florida to enjoy the winters, later making it his home, but coming back to Utica for family celebrations always warmed his heart. His independence was so important to him and as we all age, we understand the value of such, which caused him to take nothing for granted. His ancestors were one of the many founding members of St. Anthony of Padua Church. Because of his lifetime of possessing deep faith, church was a special place for him to pray and reflect. Antonio is survived by his children and their spouses, Patrick Mark Leone, Reyne D. and Raymond Malara Jr., and the memory of his daughter Debra Lynne who passed away on April 29, 2019, Tryce P. and Craig Newman, and Antonio “Tony” Leone Jr. and his wife Pamela L. Leone; his grandchildren, Raymond III, and Stacy Malara, Andrea Reyne and Greg Ortego, Deanna L. Malara; Alyce J. Newman, and Derek M. Newman; Antonio Leone III, and Brianna Y. Leone; and great-grandchildren, Desirae, Aleena, and Zoleil; and Ariella, and Eviana; cherished and adored siblings, Mary DiGristina, Angeline “Shirley” Cannistra, Russell F. Leone and Laura Jean; and his sister-in-law, Violet A. Leone. He was fortunate to have the love of many nieces, nephews, great-nieces, great-nephews, great-great-nieces and nephews, and cousins. Tony was a friend to many known for his loyalty and benevolence. He shared a special bond with Bea Lando. He was predeceased by his sisters and brothers-in-law, Carmella and John Caputo, Theresa M. and Alfred Stivali, Lena H. Bruzzese Papa and first husband Paul Bruzzese and second husband Anthony Papa, and Kathryn A. and Frank Delia; brothers and sisters-in-law, Victor C. Sr. and Carmella “Cora” Leone, Rocco A. Sr. and Angeline Leone, Frank Sr. and Grace Leone, Joseph V. Sr. and Flora Leone, and Patsy L. Leone, Jr.; brothers-in-law, Charles DiGristina, and Frank A. Cannistra; sisters-in-law, Beverly and Jack Morse, Blanche and Dominick Neri, and Marie and Henry Terchowitz. The family will honor and commemorate Anthony’s life at a private time. Relatives and friends are respectfully invited to attend Anthony’s funeral service and Celebration of Life which will commence on Friday, April 23, 2021 at 12:00 noon at St. Anthony & St. Agnes Church where his Mass of Christian Burial will be offered. Face masks are required and social distancing and contact tracing will be implemented. Expressions of sympathy in the form of donations may be directed to the American Cancer Society online at https://donate3.cancer.org/; envelopes will also be available at the service. He will be laid to rest next to his Dorothy in Carr Cemetery. During this time of social distancing that we are all experiencing, please take a moment to connect with Anthony’s family through the “Memories” section of his obituary at www.EannaceFuneralHome.com. https://www.youtube.com/watch?v=qQzdAsjWGPg

The family of Mr. Antonio "Anthony" Leone, Sr. created this Life Tributes page to make it easy to share your memories.