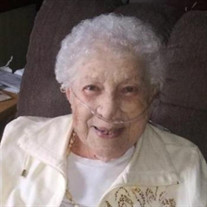 UTICA - Mrs. Antoinette Mae “Lalla” (Arcuri) Durante, age 95, passed away on Tuesday, May 12, 2020 at the Masonic Care Community with those she loved most in her heart. Born in Utica on August 26, 1924, Antoinette was the daughter of the late Joseph D. and Petronella (Nicotera) Arcuri. She was raised and educated locally. On August 17, 1946 at St. Anthony of Padua Church she married Robert W. “Bob” Durante and shared with him nearly 64 years blessed with love, patience, and understanding of each other’s needs. Bob passed away on June 3, 2010. Lalla was employed at Savage Arms as an assembler during the War and later worked at General Electric Company. She also owned and operated Antoinette’s Wig Salon on Devereux Street. She later returned home, making the needs of her children as well as caring for her parents her utmost concern. She was a compassionate, devoted wife, mother, and sister. She enjoyed frequent dancing dates with her husband at Trinkaus Manor and Twin Ponds. She loved to travel, especially trips to Florida and family reunions in Sangerfield, NY. Antoinette is survived by her daughter, Robbin Graziadei; her son, Robert W. Durante, Jr.; sisters, Rose Rescigno, and Janet Cannistra; and her brother and sister-in-law, Raymond and Sally Arcuri. She also leaves several nieces, nephews, great-nieces, great-nephews, cousins; sister-in-law, Gloria J. Santillo. She was predeceased by her brothers and sisters-in-law, Victor “Vito” Arcuri, Salvatore Arcuri, Dominick “Babe” and Molly Arcuri, Alexander “Allie” and Marianne Arcuri, Peter and Mary Arcuri, and Nicholas Arcuri, Sr.; sisters and brothers-in-law, Mary Kaufman, Josephine and Vincent “Jim” Zegarelli, Amelia “Mal” and Francis “Butch” Jones, Congetta “Connie” Rotach-Marine, Gerald Rescigno, and Anthony Cannistra; in-laws, Joseph “Cecil” and Rose Durante, Gene Durante, Joseph Victor Durante; and infant Rose Durante; nieces, including Cheryl Yozzo, and MaryAnne Damuth; nephews, including Alexander “Alex” Arcuri, Jr., and Gerald Rotach; and her longtime best friend, Marie Haritos. The family extends their gratitude to the staff of the Masonic Care Community, especially the Queens Household who were like family and went above and beyond in their care for Lalla. A thank you is also extended to a special little friend, Emadia, for her friendly visits and for uplifting Lalla. Due to current health concerns and in keeping with federal and state regulations, the family will honor Lalla’s life privately. Please take a moment to connect with Antoinette’s family through the “Memories” section of her obituary on our website. Our prayers continue to go out to all as a sign of our community support.

The family of Mrs. Antoinette Mae "Lalla" (Arcuri) Durante created this Life Tributes page to make it easy to share your memories.

Send flowers to the Durante family.