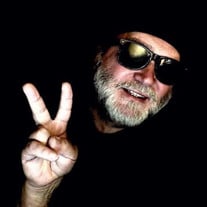 UTICA - Anthony J. “Tony” Zambino, age 67, passed away unexpectedly after a sudden, brief illness, on Saturday, May 30, 2020 in the comfort of his home with his wife holding his hand along with precious family members by his side. Born in Utica on May 9, 1953, Anthony was the son of the late Joseph R. Zambino and Joan E. (Murphy) Zambino-Coniglio. Anthony also knew the love of his stepfather, Carl J. Coniglio. He attended T.R. Proctor High School and MVCC where he majored in Graphic Arts & Photography. On September 17, 1976 he wed his best friend, Luigina Papa, and during their 43 years of marriage, he was her protector and knight in shining armor. A man of vast musical talent, and artistic creativity, Tony was a well-known, phenomenal musician, guitarist, and composer of instrumental music. He performed with numerous bands that entertained audiences locally and along the East Coast. In addition to music, Tony’s creative powers poured from his palette onto his canvas. He was a prolific painter of landscape design and had submitted his numerous works of art to the annual Munson Williams Proctor Arts Institute Sidewalk Art Show. He was also awarded recognition for his paintings by area organizations. Tony was a perfectionist in all his endeavors. Not only was he a jack-of-all-trades, he was a master of them all! He had vision when it came to woodworking and he was masterful in creating practical and unique pieces of cabinetry. Everyone reached out to Tony because he had access to a broad range of knowledge and knew all the answers. He was able to line up his logic with his intellect, making him a mesmerizing man with a magical mind. The natural world did not pass him by; he was a gardener extraordinaire and summer blooms and autumn bounty were a tour de force of plants and produce that he shared with family and friends. Through his camera lens, Tony captured the beauty of local historical, natural, and cultural sites winning an award for the Bridge Over the Creek in Proctor Park. He was also ahead of his time when it came to electronics and computers. He held an Extra Class License in Ham Radio with Call Sign of WW2V, which allows access to all frequencies. Tony was a man who truly enjoyed his home, and many endeavors that he shared with his wife Lu which made them a unique team. His gentle side was seen in the personal care he took of his 8 feral cats that he domesticated. Tony was a masterpiece. He was a renaissance man. He was a groovy guy. Tony is survived by his soul mate and wife, Lu; his stepfather, Carl J. Coniglio; sister, Cynthia LaClair; in-laws, Angela Nicotera, Joanne Warner, and the late Anita Williams; his incredible and dependable group of nieces and nephews including Kari Macero (who has been a great support to Lu and Tony), Mary Lourdes and Peter Batson, Carmen Nicotera Jr., Cara Hoyle, Bryan and Becky Bolton, Lance and Ana Croman, Amy Croman, Melanie and John Moorehead, Karen Croman, Kelly and Juan Vasquez, Tammy and Rob Maciol; great-nieces, great-nephews, cousins, and a vast number of friends, especially his life-long friend and fellow musician, Anthony Joseph. He was predeceased by his nephews, Derek Macero and Robert Hoyle; brothers-in-law, Carmine “Carmen” Nicotera Sr., and David Warner. The family asks that you keep a favorite memory of Tony, …so he can live on! Please take a moment to connect with Tony’s family through the “Memories” section of his obituary on our website. Our prayers continue to go out to all as a sign of our community support. https://youtu.be/jMuscDRcC1M

UTICA - Anthony J. &#8220;Tony&#8221; Zambino, age 67, passed away unexpectedly after a sudden, brief illness, on Saturday, May 30, 2020 in the comfort of his home with his wife holding his hand along with precious family members by his side.... View Obituary & Service Information

The family of Mr. Anthony J. "Tony" Zambino created this Life Tributes page to make it easy to share your memories.

Send flowers to the Zambino family.