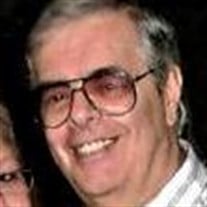 Mr. Anthony J. Scialdone (aka “Tony Troy”) passed away unexpectedly at the age of 77 on the evening of Saturday, October 2, 2021 – a great loss to his beloved family. Born on September 18, 1944 in Utica, NY to the late Joseph J. and Eleanor J. (Pugliese) Scialdone, Tony was destined to live a life enriched by love, service, and fulfillment. Baptized a Roman Catholic, he attended parochial grammar school, where he received all his sacraments. Tony learned the teachings of the Church as a boy, and held those values close throughout the remainder of his life. He graduated from T.R. Proctor High School/Class of 1962. The former Anne-Marie Eriksen met Tony at the age of 18. On July 13, 1968, they married at St. Theresa Church in New Berlin. Throughout their 53 years of marriage, they went on to live their best lives together, with Anne-Marie always remaining the love of Tony’s life. Tony cared deeply for his children and grandchildren, always making time for them, and always sharing many words of great value. He was well-known as an epic conversationalist who was never hesitant to give advice, solicited or not! Tony earned acclaim in his younger years for playing guitar and singing with local musicians under the stage name, Tony Troy. He was a member of bands such as The Cruisers and The Original Playboys. Following his marriage, he stepped back from being a musician to focus on his family. After his kids were grown, he returned to the stage to perform karaoke and to occasionally sing with his favorite local music acts. Tony particularly enjoyed the “Golden Oldies” including tunes by Bobby Darin, The Beatles, and Ricky Nelson. In addition to his music, Tony pursued other artistic outlets such as photography and drawing. In terms of professional work, Tony’s first major job was at General Electric (GE) on Bleecker Street in Utica. As a self-taught “computer geek,” he went on to work as a systems programmer at Mohawk Data Sciences (MDS) in Herkimer, and then moved to Par Technology in New Hartford where he continued applying his programming skills. After retirement, Tony could be found actively taking on projects that bridged his love of computing and artistic expression, such as creating websites, editing newsletters, designing slide shows for events, and curating musical compilations for family and friends. Tony understood the importance of service to others, which he embodied in many ways. He was a member of the US Army Reserve, Medic Division of the Elihu Root Center. He was active in several former local organizations, including acting as president of the Mohawk Valley Computer Club and the Utica Lodge 450 Loyal Order of the Moose. He even coached a baseball team that his son Anthony played on as a kid, even though Tony’s favorite sports were basketball and football. He always cheered loudly for the Boston Celtics when his all-time favorite athlete, Larry Bird, was their star player. Tony also had an appreciation for great television performances, and in particular, enjoyed re-watching classics with characters such as Barney Fife on The Andy Griffith Show, Reverend Jim on Taxi, and Larry, Darryl, and Darryl on Newhart. Additionally, Tony had a fondness for the Adirondack region of New York State. A favorite summer event was traveling with his family to Saratoga, Lake George, and the Lake Champlain regions. Of the many professional and personal hats that Tony wore, nothing was more important to him than the well-being of his family. While he had special terms of endearment for various family members, Tony’s favorite was in referring to his and his brother’s children and grandchildren as “fish” or “fishes”. He was welcomed to eternal rest by his brother Joseph J. Scialdone (March 29, 2021) and his cousin Peter J. Scialdone (January 13, 2021), who together, shared a special closeness and are now united in peace. Tony is survived by his loving wife, Anne-Marie, and his two sons and their loves, Anthony Jr. and Heather Scialdone, as well as Michael J. Scialdone and Brandy Falise. He also leaves behind his cherished grandchildren, Dominick and Valentina Scialdone; and his nephews, nieces, and great-nephews. He is further survived by his Uncle Joe and Aunt Betty Ponessa; his sister-in-law, Dale Scialdone; in-laws Diane Eriksen Vaughn (and her late husband Ricky), Marion and Larry Goetz, and Tom and Linda Eriksen; and many cousins. Tony also shared long-time and treasured friendships with Ed and Mary Cattadoris and Marie Duink. Tony’s family wishes to thank the physicians and staff of CNY Cardiology for their years of dedication and service to his medical needs. Relatives and friends are respectfully invited to attend Tony’s Mass of Christian Burial which will be held at 11:15 a.m. on Tuesday, October 12, 2021 at St. Thomas Church, 180 Clinton Rd., in New Hartford. The family will pause to acknowledge those present at the service. Interment will take place in Calvary Cemetery at the convenience of the family. The Scialdone family gratefully accepts memorial donations made on Tony’s behalf to St. Jude Children’s Hospital online at https://www.stjude.org/donate/; envelopes will also be available at the service.

The family of Mr. Anthony J. Scialdone created this Life Tributes page to make it easy to share your memories.

Send flowers to the Scialdone family.