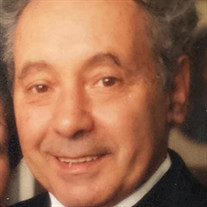 N. UTICA - Mr. Anthony “Tony” Ferrucci, age 89, went home to be with his wife and the Lord when he passed away on Wednesday, October 20, 2021. Throughout his final journey, Tony remained in the comfort of his home and was lovingly cared for by his primary caretaker, his daughter Antoinette, as well as his other daughters and family. ​Born in Little Falls, NY, on April 28, 1932 to his beloved parents, Anthony was the son of the late Giuseppe “Joseph” and Elisei (Eligia) Ferrucci. A proud U.S. Army Veteran, he had enlisted and then served during the Korean conflict, after which he was honorably discharged. ​Tony married the love of his life, the former Mary Jane Malagese, on July 6, 1957. The couple celebrated 59 years of blessed marriage together before Mary Jane’s passing on May 12, 2017. A motivated provider, Tony wanted to enable his wife to stay at home and care for their children. They shared a beautiful solidarity, and a loving routine; Tony was known to kiss Mary Jane on the lips three times – an endearing sign of his affection – whenever they would leave each other. Not a day went by after Mary Jane’s passing that he did not miss her. ​Tony was a humble and proud member of the Utica Fire Department for 26 years. Concurrently, he focused his efforts on his other professional endeavor: Tony began Dino’s Sausage & Meat Co. with his friends and business partners, John Pimpinella and Carmen A. Bossone, and continued it upon their passing. ​Tony delighted in a great number of life’s modest pleasures, and was a man driven by celebrating each day with those he loved best: his family. He had a hard-work ethic and commitment to providing, but he always prioritized spending any chance he could with his children; whether it be in their backyard or family trips close to home with extended family. From savoring simple suppers each evening to relaxing at home at night, Tony exhibited a calm and appreciative demeanor. Additionally, he was a comforting presence who offered his children his unconditional love and support, and consistently encouraged them to work through any struggles on their heart. Tony was an excellent listener seeped in wisdom, whose presence his children will fondly miss. They will always remember him as an excellent model of fatherhood, as well as a gentleman. ​As Tony became a grandfather, he was affectionately known as “Poppy,” and was thrilled to have the time to engage in their lives. “Poppy” played with them during their days, and attend their football, baseball, and soccer games, which he did proudly. He was a loyal Boilermaker fan, and loved to go to the starting line of the road race to watch the elite runners begin. Tony would proceed around the race course, tracking the leaders, until he returned in time to the finish line to watch the finalists. He found it all so thrilling and exciting! He was especially proud when his granddaughter’s Gabriella and Santina participated in the races. ​Additionally, he enjoyed relaxing watching the New York Yankees and New York Giants as well as westerns and TV Series from yesteryear. ​A faith filled man, Tony worshipped at church each Sunday, and remained faithful and grounded. Tony’s faith informed numerous aspects of his life, as he partook in many of the faith-based Italian traditions of food and specialty feasts. Tony had a special routine for Sundays, when he went to Mass at his home parish of St. Anthony and St. Agnes Church, then headed over to The Florentine Pastry Shop and finally returned home for family dinner, while never missing a stop at Dino’s Sausage for a little paper work and a check-in. ​Tony gave his heart to each of his daughters and their husbands, whom he is survived by, Alicia A. Guarascio, Rose Marie and Kenny Jarvis, Antoinette L. Ferrucci, and Patricia A. and Christopher Houser. He will also be fondly remembered by his many grandchildren; Diana Gohringer, Nicole and Anthony Caramadre, Alissa Guarascio, Patti-Anne and Nick Santiago, James Guarascio, Maranda Rose Guarascio; Kelly Jarvis and fiancée Shane Pularmo, Stephanie Jarvis, Nicholas and Emily Jarvis, Kaylee Jarvis; Brian Voce Jr., Jamie and Antonio Zenzillo, Santina and Jon Peters; and Gabriella and Colby LaCouture. He was adored by his great-grandchildren, Eric Jr., and Evan, and their father, Eric Gohringer, Sr.; Santino, Angelo and Nico; Isaiah, Aaliyah, Davion, and Joevani; Arielle; James III; Riley; Makayla; Leonardo “King Leo”; and Lillian. Tony additionally leaves behind his sister, Josephine Kabot and her late husband Greg Kabot. He is predeceased by his siblings and their spouses Ida and Louis Barretta, James and Natalie Ferrucci, and Rocco Ferrucci. Tony will live in the memories of his numerous nieces and nephews; and his in-laws, Sandra Ferrucci, Josephine Russo, Patricia and Rocco DePerno, Vincent and Nanette Malagese, and Sandra Malagese. He is predeceased by his brothers-in-law Carmen Russo and Anthony Malagese; and his father-in-law and mother-in-law Anthony and Rose (Saporito) Malagese. ​The Ferrucci Family wishes to extend their gratitude to Tony’s aide, Wendy Grems, who tended to his needs daily. They are especially grateful for Dr. Scott Brehaut-- an incredible physician and friend who exhibited unparalleled compassion and respect, and remained with them until the very end. The family is appreciative to MVHS Adult Day Health Care, where the staff was wonderfully kind and supportive. A special thank you to Nikki Alsante, for continuing to groom Tony in the comfort of his home. ​Visitation will be held on Friday evening, October 29, 2021, from 4:00 to 6:00 at Eannace Funeral Home, Inc., 932 South St., corner of Hammond Ave. Memorial contributions will be graciously accepted in Anthony Ferrucci’s honor, made to the Alzheimer’s Organization online at: https://act.alz.org/site/Donation; envelopes will also be available at the funeral home. Tony’s funeral service and Celebration of Life will commence on Saturday, October 30, 2021 at 10:00 from the funeral home and at 11:00 at St. Anthony and St. Agnes church where his Mass of Christian Burial offered. Military Honors will be conferred by the U.S. Army. Committal will take place in Calvary Cemetery.

N. UTICA - Mr. Anthony &#8220;Tony&#8221; Ferrucci, age 89, went home to be with his wife and the Lord when he passed away on Wednesday, October 20, 2021. Throughout his final journey, Tony remained in the comfort of his home and was lovingly... View Obituary & Service Information

The family of Mr. Anthony "Tony" Ferrucci created this Life Tributes page to make it easy to share your memories.

Send flowers to the Ferrucci family.