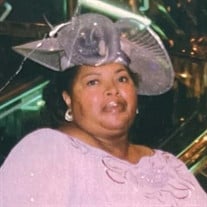 “Absent from the body and at home with the Lord…” That is our confident credence as we honor the life and legacy of our beloved Missionary Annie Lois (Bennett) Perkins. Lois, as she was affectionately known by family and loved ones, entered the world September 25, 1947 to the late Elijah Boles and late Ruby (Nathaniel) Collins. Strong spiritual faith was at her core from birth as both parents were devoted Christians. Her father was a founding member of Metropolitan Missionary Baptist Church in Utica, NY. Additionally, her mother was a minister who went on to become President of the Usher Board therein. Growing up as one of nine children, Lois was educated throughout the Utica City School District. She demonstrated a love of writing and poetry, amongst many other interests including being a member of the infamous Screeming Eagles Drill Team that earned the privilege of marching in the 1964 Macy’s Thanksgiving Day Parade. Ultimately, as a young adult, it was her compassion and love for helping others that led her to receive her certification and degree in Nursing while working at the Masonic Home. She also acquired a skill set of welding and would later utilize her versatile talents with such companies as Univac, Chicago Pneumatic, and General Electric, later known as Lockheed Martin. Her passions demonstrated in her work revealed just a fragment of the devotion she committed to her most cherished title: Mother. Lois married Mr. Wardell Perkins in the late 60’s and went on to collectively raise four children through whom her memory continues to live; Tyrone Perkins of Syracuse, NY, Natasha Davis (Daniel) of Utica, NY, Wardell “Xavier” Perkins of Syracuse, NY, and Rashonda Perkins of Syracuse, NY. Her mothering catered to the unique needs of her family individually while overall exemplifying unconditional love, patience, respect, dedication, forgiveness, and hard work. Truly a virtuous woman, Lois’ personal walk with God was a journey she held dear. It was an act of love how she kept her family grounded in church, and she would later carry out that tradition by instilling the love of God in her grandchildren as well; so much so that she was blessed to see the fruits of her labor realized when her eldest grandson DeQuan was appointed to pastor. She herself was ordained and received her licensure as a Missionary in 1995 under the tutelage of the late Bishop Calvin Ashley, Sr. of St. Marks Healing and Deliverance Ministries. In this capacity, she humbly honored her call to service with dignity and grace. Lois wasn’t afraid of dreaming and reinventing herself. After many days of tirelessly commuting between Utica and Syracuse, Lois finally relocated to Syracuse in 2000 where she had since resided as an Engineer with Lockheed Martin. In more recent years, Lois enjoyed traveling and the occasional cruise. She also helped to raise some of her grandchildren and even came to be known as “grandma” to her neighborhood, as she would cook meals to feed the local kids and offer an encouraging word and prayer without hesitation. She was the go-to person for many and her absence will certainly be felt. On November 1, 2021, Lois peacefully transitioned to her heavenly home with her immediate family at her bedside. Predeceased by her sister, Beaula Bennett, her love will continue to shine bright through her siblings who held a special place in her heart: Ellard-James Boles of Texas, Nathaniel Bennett (Renee) of Downstate, NY, Charles Bennett of Cleveland, OH, Billy Bennett (Fern) of the State of Washington, David Bennett (Valerie) of Altus, Oklahoma, Hamza Joel Collins (Fatima) of Norwich, CT, Ronald Collins of Cleveland, OH, and Michael Collins (Marie) of Norwich, CT. Her legacy will carry on through the joy of her heart, her grandchildren: Quantesa, Akita, DeQuan, Marcus, Andrew, Chucquan, Kasavian, Brianna, Jayvon, Latrell, Asianna, India, Fatimah, Khadijah, Josiah, Quadre, Tyasia, Tyrone Jr., several great-grandchildren, and her god-son, Pastor James Jackson. She was predeceased by her god-mother, Anna Mae Goodson of Utica, NY and her god-brother, Theodore Henderson of Denver, CO. The family would like to thank the staff of St. Joseph Hospital for their genuine efforts, care, and concern. Gratitude is also expressed to all those who have extended their love and condolences during this time of mourning. Visitation will be held on Saturday afternoon, November 13, 2021 from 12:00 – 1:00, followed by remarks of remembrance, at Greater Highway Deliverance Temple, 1705 Whitesboro St., Utica. Her Home Going Service and Celebration of Life will be offered at 1:00 immediately following visitation. Interment will take place in New Forest Cemetery. This tribute to Annie’s life was lovingly written by her family.

&#8220;Absent from the body and at home with the Lord&#8230;&#8221; That is our confident credence as we honor the life and legacy of our beloved Missionary Annie Lois (Bennett) Perkins. Lois, as she was affectionately known by family and loved... View Obituary & Service Information

The family of Annie Lois (Bennett) Perkins created this Life Tributes page to make it easy to share your memories.

“Absent from the body and at home with the Lord…”
That is our...

Send flowers to the Perkins family.