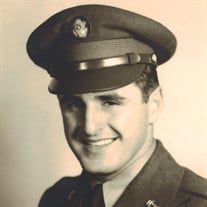 NEW HARTFORD - Mr. Angelo L. “Andy” Scarafile, age 87, passed away on Saturday, June 6, 2020 with his family by his side. Born in Utica on November 29, 1932, Angelo was the son of the late Joseph and Marguerite (Maggi) Scarafile. A graduate of T.R. Proctor High School/Class of 1951, he was an accomplished gymnast recognized by New York State for his performance 3 years in a row. He continued his studies at Delhi University in the area of Building & Construction. A proud veteran, Angelo honorably served his country in the United States Army stationed stateside. On July 14, 1956 he wed his high school sweetheart Elizabeth “Liz” Russo. They had a love that endured the years, and they relied upon each other during the best, as well as the more trying times. He loved Liz dearly during their 63 years of a marriage made in heaven. Angelo was employed by the General Electric Company beginning at the Broad Street location as a Manufacturing Engineer. He also held positions with various companies throughout New York State. He retired after a lengthy career in his chosen industry from Lockheed Martin in Syracuse. One of three children of immigrant parents, Angelo adored his mom and dad, and as a patriarch, he loved his wife and children. He was a strong, honest, principled man, and a handsome fellow at that! Although he was humble by nature, he was a natural success in his lifetime endeavors. Angelo and Liz were blessed with four beautiful children of whom they were so proud. Angelo also had a great respect for his in-laws and nothing could have pleased Liz more. As a couple, they did their very best to be role models and teach by example what a strong work ethic entails, he was expected and did work at 6 years old picking beans. And in his daily life beginning early in the morning, put in a day’s work, and rested at day’s end. Angelo’s sons were always by his side and learned valuable life lessons from him. Because of his skills and due diligence, he was able to erect a beautiful home for his wife and family and that was certainly one of his greatest physical accomplishments. He was always industrious and assisted others in repairing or restoring many automobiles. He was a great cook and was passionate about it! An avid gardener, his tomatoes were the best, and he savored and shared them, and he picked mushrooms seasonally. He was an avid hunter and was a member of the Beagle Club. A hunting camp located in Norwich was his getaway to his love of nature. It was a sacred place, and he made it a camp which was excellent therapy for him and he truly loved the time that he spent there with his sons. Back when their lives were more social, the house was filled with friends, wonderful dinners, and fun times. Having three boys that loved to eat, there were many plentiful meals, and memorable gatherings. He believed in God and recited the Rosary daily for the best intentions of those he loved. Only a parent who has lost a child could understand the quote, “The passage of time heals almost everything. Give time time.” Angelo is survived by his beloved wife Liz; his sons and daughter-in-law, Angelo and Sharon Scarafile, Mark Scarafile, and Michael Scarafile; and the memory of his daughter Laurie Scarafile Riffle who passed away on July 31, 1986 at the age of 29; his grandchildren, Tom Scarafile, Joe Scarafile, and Nick Scarafile; Salvatore Scarafile, and Santina and Ben Kenny; Taylor Scarafile, and Michael Scarafile Jr.; and Megan Riffle Riley and her husband Andy Riley; and his great-grandchildren, Lincoln, and Grace. He also leaves his nieces and nephews, especially acknowledging Donna Jacobson, Marguerite Spano, Marlene Hancock, and Joseph Scarafile; a sister-in-law; in-laws, Marie Russo (the former executive director of The Neighbor Center), Linda Russo, Frank Fuccillo, and Congetta (Coria) Russo. He was predeceased by his sister and brother-in-law, Antoinette and Salvatore Caruso; brother and sister-in-law, Daniel and Connie Scarafile; nephew, Daniel Scarafile; and in-laws, Salvatore and Mary Russo, Eleanor and Samuel Russo, and Carmen “JuJu” Russo. The family extends gratitude to Dr. Fred Talarico and his wife Rose Mary for their outstanding compassion in being present to Liz and her sons during this difficult time with his unique healing touch; the ICU staff at MVHS at St. Elizabeth Medical Center for their medical care and kindness; and dear neighbors, Vinny and Esther Grimaldi. Due to current health concerns and in keeping with federal and state regulations, the family will honor Angelo’s life privately with immediate family only. Memorial contributions in Angelo’s memory may be directed to St. Jude Children’s Research Hospital online at https://www.stjude.org/donate or by mail to 501 St. Jude Place, Memphis, TN 38105 or to Stephen Siller Tunnel to Towers Foundation online at https://tunnel2towers.org/ or by mail to 2361 Hylan Boulevard, Staten Island, NY 10306. Please take a moment to connect with Angelo’s family through the “Memories” section of his obituary on our website at www.EannaceFuneralHome.com. Our prayers continue to go out to all as a sign of our community support.

The family of Mr. Angelo L. "Andy" Scarafile created this Life Tributes page to make it easy to share your memories.

Send flowers to the Scarafile family.