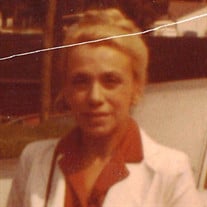 UTICA - Mrs. Angela M. Piperata was reunited with her beloved daughter Mary Lourdes when she passed away on Thursday, April 30, 2020 with her loving family by her side. Born in Utica, Angela was the daughter of the late Joseph and Mary (Bruno) Piperata. She was raised and educated locally. She was a loving mother of four children who were a blessing to her life. She lived for them, and as a single mom, she provided for them and was a wonderful example of what a parent should be. An addition to her family life was obvious the moment she met Arthur J. Dischiavo, and for 51 years they shared common interests and quality time together. Arthur loved and respected her children, and their uniquely blended family remains bonded to this very day. He was not only her partner, but also the “love of her life”. A waitress with an outstanding personality, Angela served patrons at various local restaurants including Dischiavo’s, Beachley’s, and Tony Sparagna’s, where she worked until her retirement. At one time she was a member of the Restaurant Worker’s Union. While facing all the adversities of her life, her spirit was never broken, and she focused on her family because they came first. She spoke her piece, always with a perspective towards their best interest. The values she instilled live in the hearts of her children and grandchildren who are grateful to have had her as their mom and grandma. She was a marvelous cook and exceptional baker, and even though they rotated the holidays, her children expected her to bring only herself and Arthur, but they arrived with their car trunk filled with food! Angela had an affinity for singing and dancing, and it was her favorite form of entertainment. She was a faithful woman who prayed and kept the Lord close to her heart. She practiced her Catholic faith at St. Anthony & St. Agnes Church. In retrospect, she was a successful woman in her own right and she will rest in peace as a reward for a life well lived and a job well done. Angela is survived by her loving partner, Arthur; her daughters and son-in-law, Donna (Saporito) Caleo (and the memory of her late son-in-law, John R. Caleo who passed on July 5, 2014), Renee and Ken Cerjan, and Bonnie Saporito. She cherished the memory of her daughter, Mary Lourdes Saporito who passed away in 1994. She also leaves her seven grandchildren; and her nine great-grandchildren. The family wishes to thank the physicians, nurses, and staff, especially the personnel of the Willow Unit as well as the Elm Unit of the Presbyterian Home for CNY who cared for Angela with kindness. Due to current health concerns and in keeping with federal and state regulations, funeral services and Interment will be held privately. Please take a moment to connect with Angela’s family through the “Memories” section of her obituary on our website at www.EannaceFuneralHome.com. Our prayers go out to all as a sign of our continued support.

UTICA - Mrs. Angela M. Piperata was reunited with her beloved daughter Mary Lourdes when she passed away on Thursday, April 30, 2020 with her loving family by her side. Born in Utica, Angela was the daughter of the late Joseph and Mary (Bruno)... View Obituary & Service Information

The family of Angela M. Piperata created this Life Tributes page to make it easy to share your memories.

UTICA - Mrs. Angela M. Piperata was reunited with her beloved...

Send flowers to the Piperata family.