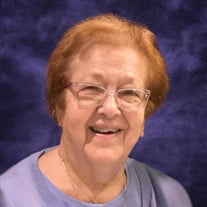 UTICA - Mrs. Angela M. (Bonomo) Nassar, age 93, passed away on Friday, August 28, 2020 in the comfort and dignity of her home with her loving family by her side. She was born on April 17, 1927 in Utica, a daughter of the late Vincent and Mary (Acierno) Bonomo. Angela began her formal music training when she was 8, studying piano with Catherine Parker, and later with Cecil Davis. Angela was named outstanding musician of her senior class at Proctor High School. She studied piano, organ, and cello. Angela was a graduate of the prestigious Eastman School of Music of the University of Rochester where she was an organ major studying under Evelyn Prior. After graduation, Angela worked for a year at Marcy State and Utica State Hospitals as their organist. In 1950, Angela became the organist and musical director at the iconic Historic Old Saint John’s Church in Utica. At that time, she was the youngest organist in the Syracuse Diocese and remained in her position, at the top of her profession, for 70 years. She was a consummate professional who never took her musical gift for granted. Until the time of the pandemic, she continued to practice each and every day. Angela was legendary for her Midnight Mass and Easter services, as well as her wonderful choir, whose members were a second family to her. She directed both the adult and children’s choir, as well as played at thousands of funerals and weddings for parishioners. She regularly conducted concerts as part of the Downtown Monday Music Series. In addition, Angela played a vital role in influencing the lives of children in the parish and generations of church musicians, many of whom sent her notes of thanks this summer. She also taught music at Utica Catholic Academy, and directed the Glee Club, where she was able to influence the musical talent and interests of her students. Angela was an avid golfer, curler, and all-around athlete. She was well known around town as a champion baker, and shared her output with many. Her Christmas fruit cakes were a prized gift. Angela was the center of her family and very much enjoyed family gatherings where a Manhattan was sure to be served. Angela loved the Adirondacks where she spent summers from her childhood until her death. The Adirondacks were her happy place where she enjoyed spending time with her summer family completing puzzles, playing games, and having a good talk. Angela was united in marriage to her childhood sweetheart Michael J. Nassar, Jr. on August 30, 1952. They celebrated 52 loving years of marriage that was filled with happiness, family, and mutual respect. This past Sunday they celebrated 68 years of their union in heaven. Angela leaves behind her children: Susan (Joel Fredell), Michael (Dianne), Sondra, and Elizabeth, as well as her beloved grandchildren Alexis and Michael Nassar, and Leila and Mishkar Nunez-Fredell. She also leaves behind her sister Betty Forte, and was predeceased by her sisters Gertrude Darman, Gina Murano, and Vi Bonomo. She leaves numerous nieces, nephews, cousins and their families, who filled her life with so much joy. She will be greatly missed by her canine companions Sophia and Carlo. The family would like to extend special thanks to all who surrounded Angela with love and care during these difficult months. Much gratitude to the ladies of Notre Dame Elementary School for the enormity of their kindness. A particular thanks to special niece and nephew, Teri and David Murano for their weekly visits; and thanks to Gina and Steve Surace, and Nancy Zumpano for all they did to make Angela’s final summer in the Adirondacks a reality; and to the cherished members of the St. John’s Choir, who were a second family, there are no words to express our gratitude for your devotion and love. The visits, food, gardening, and companionship were an enormous comfort to her and to the family. Visitation will be held Friday from 4:00-7:00 p.m. at her home parish, Historic Old St. John’s Church, 240 Bleecker Street. We kindly ask the cooperation and patience of guests as we adhere to current health guidelines and restrictions. All are welcome to attend Angela’s funeral service and Celebration of Life which will commence on Saturday morning at 10:00 at Historic Old St. John’s Church where her Mass of Christian Burial will be offered. At both the visitation and the funeral, social distancing, registration for contact tracing, and a mask covering your nose and mouth will be required. Angela loved reading and saw the importance of education. You may honor her by making a contribution to either Notre Dame Elementary School Library or the Scholarship Fund at St. John’s Church by mail to Notre Dame Elementary School (Library) 11 Barton Ave., Utica, NY 13502 or St John’s Church 240 Bleecker St., Utica, NY 13501 or online at http://www.historicoldstjohnschurch.com/stewardship.htm; envelopes will also be available at the church. Interment will take place in Calvary Cemetery at the convenience of the family. Arrangements have been entrusted to the Eannace Funeral Home, 932 South St., corner of Hammond Ave. Please take a moment to connect with Angela’s family through the “Memories” section of her obituary. Our prayers go out to all as a sign of our continued support.

UTICA - Mrs. Angela M. (Bonomo) Nassar, age 93, passed away on Friday, August 28, 2020 in the comfort and dignity of her home with her loving family by her side. She was born on April 17, 1927 in Utica, a daughter of the late Vincent and Mary... View Obituary & Service Information

The family of Mrs. Angela M. (Bonomo) Nassar created this Life Tributes page to make it easy to share your memories.

Send flowers to the Nassar family.