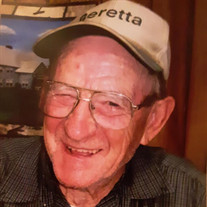 MARCY, NY - Mr. Alfred J. “Al” also known as “Red” Paniccia, Jr., age 87, went home to the Lord when he passed away on Thursday, August 5, 2021, with his loving family at his side. Born in Utica, NY on November 6, 1933, Alfred was the son of the late Alfred, Sr. and Philomena (Moreno) Paniccia. On May 23, 1959, Al married Irene A. Roback at Holy Trinity Church in Utica and for 62 years they were mutually devoted and trusted each other in the direction their journey through life would take. Al was a man who upheld his wedding vows, and adored Irene, unto his last day. Al began his life’s work with an apprenticeship at the International Brotherhood of Electrical Workers (IBEW) Local #181 in Utica, and continued on to a Journeyman Electrician which led to his career that spanned nearly 70 years with the union that became Local #43 out of Syracuse. He worked for various notable contractors and for many years worked at Vernon Downs Race Track. Al retired in 1995 and continued working during his retirement at Engler Electric, Inc. until the age of 80. The patriarch of his family, Al was the eldest of his siblings, a station in life that gave him the skills to care for and be responsible for his younger brothers and sisters. As a Dad, he wanted the best for his children. He was protective, held high expectations for them, and instilled the value of excellence and perseverance. They loved and respected their Dad and he will forever be by their side. Al’s grandchildren were the light of his life and he took great pride in supporting their growth and development. They loved their Grandpa and they will always keep him in their memory. Al will remain unforgettable for the compassion he held in his heart and his boundless generosity. He possessed great dignity, was humble, kind, and proud of his accomplishments. One of his greatest character traits was his dependability and availability to be there for everyone, at any time. He was in sync with his generation born during the Great Depression, and he retained a hard work ethic, devotion to family and God, and a strong will and determination. Al was happiest when surrounded by his family at various gatherings and holidays, especially sitting by a warm fire after a delicious meal prepared by Irene. The yearly family picnic was particularly important to him. Al and Irene enjoyed many camping and fishing trips to Horseshoe Lake in the Adirondacks. He paused to enjoy numerous sports including League Bowling, Hockey, and INDY/NASCAR Racing. He was an enthusiastic hunter for many years and a lifetime member of the National Rifle Association (NRA). Al was also an active contributing member of the Ilion Fish & Game Club and the Clinton Fish & Game Club, where he was an avid clay target shooter. Al was renowned for the garlic that he grew in his vegetable garden; his perfect strain of garlic was meticulously tended to and he was gracious in sharing his bounty with family and friends. In retrospect, his greatest accomplishments were his family, his dedication to work, and the many dear friends he was blessed with throughout his life. A devout Catholic, Al was a longtime member of St. Joseph & St. Patrick Church in Utica, where he faithfully attended weekly Mass and observed all Holy Days of Obligation. Alfred is survived by his beloved wife, Irene; his children and their loves, Michael A. Paniccia and Thien Hong, Melanie A. Collandra and Daniel Mahaffy, and Mark A. Paniccia and Lori Francis; his grandchildren, Rena P. Collandra, and Matthew J. Collandra. He also leaves his siblings, Rose Minarchi, Marie Arellanes, Rocco (and Jan) Paniccia, Richard Paniccia, and Phyllis DuRoss; and his sister-in-law, Rosemary Paniccia. He was preceded by his brother, Samuel R. Paniccia; and his in-laws, William Minarchi, Joseph Arellanes, and Delores Paniccia. Al also leaves his in-laws, Raymond and Joanne Roback, Ronald and Kathy Roback, and the memory of his in-laws, Henry J. “Hank” and Ellie Roback, Edward and Helen Roback, and Chester and Frances Roback. He will also be remembered by his many nieces, nephews, great-nieces, great-nephews and cousins. He was predeceased by his father-in-law and mother-in-law, Michael and Josephine (Topolski) Roback. The family extends sincere thanks to Dr. Sultana Razia and staff at Slocum Dickson Medical Group, for their kindness and compassion throughout the years. Visitation will be held Friday, August 13, 2021 from 4:00-6:30 PM at the Eannace Funeral Home, Inc., 932 South St., corner of Hammond Ave. Alfred’s funeral service and Celebration of Life will commence on Saturday morning, August 14th at 10:00 from the funeral home and at 11:00 at St. Joseph & St. Patrick Church where his Mass of Christian Burial will be offered. Committal Prayers and Entombment will follow in Calvary Cemetery Mausoleum.

The family of Mr. Alfred J. "Al" Paniccia Jr. created this Life Tributes page to make it easy to share your memories.

Send flowers to the Paniccia family.