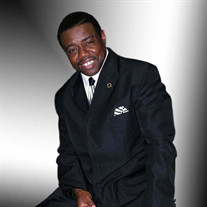 UTICA - Alfred “Fig” Newton, age 67, was called home to take his rest on Monday, April 26, 2021. He was born on March 23, 1954 in Utica to the late Virgil Johnson and Ruby Newton Minor. Alfred attended Utica City schools and graduated from Utica Free Academy/Class of 1972 where he excelled in academics, basketball, and football. He would then attend Vermont Academy Prep School for a year, where he dominated in football and basketball and would later be inducted into the Hall of Fame. He then attended Alfred University where he played football for four years and received his Bachelor of Arts degree in Criminal Justice. One of his records remains intact for having the most interceptions in a single game with 5! His skills on the field would also lead to him receiving an invite to try out for the Dallas Cowboys. On June 11, 1983, Alfred was united in Holy Matrimony with Gladys “Cookie” Williams. Alfred and Gladys shared almost 40 years together and from this union God blessed them with three children. Fig, as he was affectionately called by his family and friends, cherished his union with Cookie and celebrated every milestone that his children accomplished. Fig was a dedicated worker in Customer Service for 35 years at Niagara Mohawk (National Grid), the position from which he would later retire. Alfred was a well-rounded and well-balanced son, brother, husband, and father. As a dad, he was supportive, understanding, and comforting, …no matter what the problem. He shared the wisdom of his years to shed light on a solution for any situation. He also shared a smile and a sense of humor to soften sadness and uplift spirits. His pastimes included watching his beloved sci-fi classics, Star Trek and Star Wars, and he never missed a movie or a comic book version, in both series! He was knowledgeable and up-to-date on current events. CNN was his go-to channel and he engaged in great debates about politics, national and international, followed by Fantasy/Sci-Fi, History, Conspiracy Theory, and to top off his knowledge and keen mind, he spoke Russian! He had a strong passion for sports that he shared with his son and he stood by him as he transitioned through the different levels of their common passion. He also coached basketball at the Boys & Girls Club local site, and at the Cosmopolitan Center. That was A.J. and Fig’s connection. He drove to tournaments and never missed a game. They also enjoyed many memorable family trips. Al was a great blueprint for his children to follow. He took care of business, but he was also a great jokester, spot-on for many, but corny at some. But, at the end of the day, he really made you laugh. He was a good family man and an awesome dad, and he leaves a legacy of practical and professional wisdom for his children to follow. He was an active member of St. Matthew’s Temple Church of God in Christ where he served in many capacities for over 40 years. With the Lord’s guidance, Alfred was a good neighbor, a friend to many, and a godfather who surpassed expectations for the honor. Saturday night was together with family, followed by Church on Sunday. Those who knew and loved him will remember that Fig’s smile was real, and when he spoke, it was the truth. He never made promises he couldn’t keep, and he always had humor to light the path along the way. A big part of this family is now gone, and those who remain will rely on their faith and the lessons of love and life Fig taught them. He leaves to cherish his memory, his wife, Gladys “Cookie” Newton, who was truly his best friend; his son, Alfred “A. J.” Newton (Linda, the only one who truly understood his humor and laughed at all his repeats); and two daughters, Nashuna, and Nakiesha Newton. In addition, Fig also leaves behind three brothers and two sisters with whom he shared special times that nurtured their relationships: Randolph Newton (Shirley Robinson-Newton), Jan Newton (Cynthia), L’Roy Newton, Dorothy Newton Haynes, and Shirley Roundtree. He also leaves a host of nieces, including special niece, Brittany Roundtree who was one of his great debaters and will cherish his memory; nephews, great-nieces, great-nephews, cousins; special godchildren: Melissa Brown, Qiaja Evans, Jonea Hymes, Bri Springer, Kimora Lucas, Tordell Garrett, and Cashaé Jackson; mother-in-law, Queen A. (March) Williams; in-laws, William Hamilton, Carrie Johnson, Sarah Akins, and Amos Williams; and just to name a few lifelong friends, gentlemen who shared so much: Ernest Brown, Jim Winston, Harold Barnes, Frankie Shackleford, Julius Blackshear, Stanley Winston, Jim Cummings; and a friendship treasured with Walter Copeland who never let miles keep them apart. Alfred was preceded in death by his brother, John Newton; aunt, Ruth Lasane; father-in-law, Oscar Williams; and brother-in-law, David Williams. The family is grateful to the personnel of the Neurology Department at MVHS at Faxton-St. Luke’s and their doctors, nurses, and staff for the comfort and kindness they shared with Al and his family. Friends may pay their respects to Al “Fig” on Tuesday morning, May 4, 2021 from 11:00-12:30 at St. Paul’s Baptist Church, 219 Leah St., Utica, NY 13501. Alfred’s Home Going Service & Celebration of Life will commence at 12:30 at the church. Face masks are required and social distancing and contact tracing will be implemented. Interment will follow graveside in Forest Hill Cemetery. During this time of social distancing that we are all experiencing, please take a moment to connect with Alfred’s family through the “Memories” section of his obituary. Our prayers go out to all as a sign of our continued support. “I have fought a good fight, I have finished my course, I have kept the faith” - Timothy 4:7

The family of Mr. Alfred "Fig" Newton created this Life Tributes page to make it easy to share your memories.

Send flowers to the Newton family.