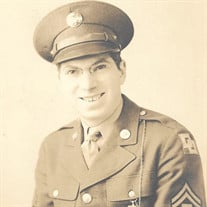 UTICA – Mr. Alfonzo J. “AJ” “Al” DiCesare, Sr., age 100, of North Utica, passed away comfortably and peacefully with his loved ones at his side on Thursday, February 4, 2021 at The Pines at Utica Center for Nursing and Rehabilitation. Born in Utica on October 8, 1920, Al was the son of the late Pasquale and Theresa (Cecci) DiCesare. He was raised and educated locally. A veteran of the U.S. Army, he served stateside with the Medical Corps in the 1247th Hospital Train Unit. On April 14, 1945 he was joined in marriage with the former Mary M. DiStefano. Al and Mary shared a relationship filled with good humor, great love, and constant devotion for 70 years prior to her passing on August 11, 2015. At one time, Al served as a company clerk with the Civilian Conservation Corps. He then accepted a position with the railroad, first working for the NY Central Railroad, later for Penn Central and after the merger, Conrail. He retired in 1980. He was a communicant of St. Mark’s Church in North Utica and was a devoted usher for the parish. Al was both socially inclined and socially skilled. He was gifted with a wonderful sense of humor and admirable leadership qualities. He was active with various local groups, especially the American Legion, Post #1290 where at various times he served in a number of different offices, including Past Oneida County Commander for two terms, Past Dept. of NY Sergeant-at-Arms, and Past National Distinguished Guest Committeeman. He also belonged to the Fraternal Order of Eagles #97 on Cosby Manor Road where he once held the position of Treasurer. He loved golfing and socializing with his buddies at the Post where he often enjoyed another of his favorite pastimes, playing cards. Al held close to his heart the memory of his daughter, Theresa R. “Terri” DiCesare-McDowell who passed away on September 16, 2009. He is survived by his son, Al J. “Sonny Dee” DiCesare, Jr.; his former daughters-in-law, Elaine, Cheryl, and Carol; grandchildren, Christopher J. DiCesare and spouse Thierry Gablin, Tanessa “Tane” Spann, Paul W. McDowell Jr., and Joshua D. McDowell. He will also be remembered by his many nieces, nephews, great-nieces, great-nephews, cousins; in-laws, Armando “Arfe” and Pauline DiStefano; and his friends. He was predeceased by his brothers and sisters-in-law, Joseph and Mary Jane “Jenny” Cardone, Carl and Amelia “Millie” DiCesare, and Peter and Frances “Dolly” DiCesare; sisters and brother-in-law, Lorenza “Larrie” and Thomas Cappozella Giangolini, and Natalie DiCesare who passed in her infancy; in-laws, Linda and Frank Luciano, and Albert Giangolini; nephew, Luke Cardone; and friends, Jack and Elvira Getti. The family extends their thanks to family friend Frank for his many acts of kindness in assisting Al during his times of need. They also wish to thank Bonnie, for the many rides to church, also all of the friends Al had made throughout his lifetime. They also wish to express gratitude to Carol who, while battling COVID herself, found the time to call Al and together they lifted each other’s spirits. The family also extends thanks to the staff at Pounder Hall in Oriskany at the Eastern Star for their care and concern; and the personnel of The Pines at Utica for their compassion in tending to Al during his stay. Relatives and friends are respectfully invited to attend Al’s Prayer of Committal and Final Commendation with Military Honors conferred which will be held on Wednesday afternoon, April 14, 2021 at 1:00 p.m. at St. Agnes Cemetery Chapel, 601 Arthur St., Utica, followed by Inurnment in St. Agnes Cemetery. Face masks are required and social distancing and contact tracing will be implemented. During this time of social distancing that we are all experiencing, please take a moment to connect with Al’s family through the “Memories” section of his obituary. Our prayers go out to all as a sign of our continued support.

The family of Mr. Alfonzo J. “AJ” “Al” DiCesare Sr. created this Life Tributes page to make it easy to share your memories.

Send flowers to the DiCesare family.