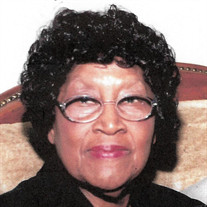 N. UTICA – Deaconess Alberta (Huff) Hill, age 98, passed into the arms of the Lord on Saturday morning, December 18, 2021, in the comfort and dignity of her home with her devoted daughters Norma Jean and Lillian by her side. Alberta was born the youngest of eight children in Lockhart, AL on November 15, 1923 to the late Rev. Jesse and Jessie Bell (Harris) Huff. Alberta spent her formative years in Eufaula, AL, where she was educated in the public-school systems. She was blessed to grow up in a loving, Christian family, headed by her father who was an ordained, itinerant minister in the African Methodist Episcopal Church. From an early age, Alberta’s parents had instilled in their children a love of God, the importance of worship, and principles of Christian living. In the early 1940s, Alberta came to Utica to live with her mother-in-law, Mrs. Eddie C. Hightower. Alberta remained there while awaiting her impending marriage with her beloved Norman Hill, who was soon to return after being honorably discharged from the U.S. Air Force. The couple was married on August 24, 1946, and were then blessed with two daughters: Norma Jean and Lillian. Alberta loved her daughters immensely, and believed they were as “precious as pearls.” Indeed, Alberta was a devoted wife and mother who centered her life around her family and her church. After 67 years of their loving marriage, Norman sadly departed this world on January 28, 2014. Alberta’s deep faith in God was practiced at St. Paul’s Baptist Church, of which she was a long-standing member. She had joined the faith community shortly after her marriage to Norman, so that the pair could serve God united in the same church, in the same denomination. Alberta delighted in growing her knowledge of the Lord, and enjoyed attending the Adult Sunday School classes. Additionally, Alberta prioritized her daughters’ faith formation, and enrolled them in their age-appropriate classes to further their Christian development. By her example, Alberta taught her daughters the power of prayer and the importance of reading the scriptures daily before any other activity. Furthermore, Alberta was a member of the gospel choir, and was even invited to serve on the Deaconess Board, where she diligently carried out the various duties required of the ministry. Upon her retirement, Alberta was honored with the title “Deaconess Emeritus.” Additionally, Alberta was a member of and contributed to the Eastern Star Organization, under the Prince Hall Masons (Hiram Lodge). She participated in many of their activities and community service projects. Alberta was employed briefly as a domestic housekeeper to several Utica families, but in later years shifted trajectories and embraced a position as a school crossing guard for the City of Utica. Alberta greatly enjoyed her duties of guiding the children at the crosswalks at the St. Joseph and St. Patrick Parochial School. Alberta enabled students to safely cross the streets to their schools for eight years, even winning a contest for “The Best School Crossing Guard in the City.” This achievement gained her the opportunity to be celebrated in an appearance on WKTV News. Left to cherish Alberta’s memories are her daughters, Norma Jean Hill, and Lillian Woods; as well as her many special nieces and their families, Nellie Jo Moore; Sheridean Huff; Dorothy Scotton; Gladys Scotton; Angenette Scotton; and Alberta’s special nephews, Oscar, and Michael Anderson; Jerome Long; and Bruce Scotton. She is additionally survived by her cousins, Jimmie Connor, Albert Jr. and Sarah Jones. Alberta leaves behind numerous special friends, Bertha Whiteside-Robinson, John and Joyce Mitchell, Walter and Judith Young, Willie and Gloria Maffett, Patricia Baker, the Ed and Brenda Bonner family, sisters, Margaret Reed Shelton, Darlene Shelton, and Melvina Adams; Rev. Mary Webster, Ernestine Wilson, Rachel Hamlett, Betty Clemons, Mary and Larry Cross, Patricia and Cleon Frazier, and Beaulah Thompson; and many fellow parishioners of St. Paul’s Baptist Church – they were held dear to her heart, and she had great affection for them. Alberta was predeceased by her siblings, Rev. Colonel Moses Huff, Rev. Edgar Lee Huff, Mary Anderson, Josephine Long, Clara Bell Lynn, Emma Andrews, and J.W. Huff; as well as her mother-in-law, Eddie C. Hightower. The Hill family wishes to express their appreciation to Hospice and Palliative Care, Inc., and Caregivers Home Health Agency. A special note of thanks is extended to Pastor Marilyn Bell, Deaconess Sandra Wilkerson, Deaconess Dale Hunt, Missionary Pamela Williams, and Deacons Kenneth Bowens and Timothy Wilkerson. Visitation will be held on Thursday, December 23, 2021 from 11:00 AM – 12:00 PM at St. Paul’s Baptist Church, 219 Leah St. Relatives and friends are respectfully invited to attend Deaconess Alberta’s Home Going Service and Celebration of Life which will commence at 12:00 at the church. Regardless of vaccination status, face masks are required, to remain in compliance with the state and county mask order. She will be laid to rest in New Forest Cemetery in the Spring.

N. UTICA &#8211; Deaconess Alberta (Huff) Hill, age 98, passed into the arms of the Lord on Saturday morning, December 18, 2021, in the comfort and dignity of her home with her devoted daughters Norma Jean and Lillian by her side. Alberta was... View Obituary & Service Information

The family of Deaconess Alberta (Huff) Hill created this Life Tributes page to make it easy to share your memories.

Send flowers to the Hill family.