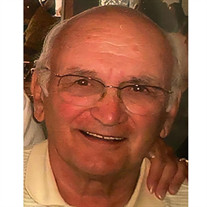 NORTH UTICA - Mr. Albert C. Grimaldi of North Utica passed away on June 3, 2020 with his loving family by his side. He was 85. Born on April 2, 1935 and raised in Utica, Al was the son of Albert and Mabel (Olite) Grimaldi. He was educated locally and graduated from Thomas R. Proctor High School in 1953. He had many friends in school, and it was there he met and fell in love with his childhood sweetheart, the late Diane “Dixie” Martelli. Al and Dixie were married in 1955, a loving marriage of 52 years until Dixie’s passing in August of 2007. Al was a route salesman for Hameline Dairies from 1956-1969, a job he enjoyed and through which he made many lifelong friends. In 1969, he was appointed a Road Test License Examiner with the New York State Department of Motor Vehicles. Working his way up to become the Principal Examiner, Al’s philosophy was to help as many people as he could, and because of this attitude he was remembered favorably by many. He retired in 1996 after 27 years. His last job was helping out his son-in-law, Joe, and his daughter, Lori, at Desserts Beyond the Ordinary on Bank Place in Utica. His greatest pleasure in life was his wife and three wonderful children, eight grandchildren, and four great grandchildren. As many of you may know, he wore his Dallas Cowboys hat almost everywhere he went, and he absolutely loved the comments he received, good and bad, just about every time he wore it! Al is survived by his son and daughter-in-law, Al “Aldo” and Carolyn Grimaldi of Johns Creek, GA, daughters, Diana “Dee Dee” Grimaldi of Tampa, FL, and Lori and Joseph Leone of Utica. He leaves grandchildren Niki Stoller and her husband Mike of Corona Del Mar, CA, Ali Wright of Cumming, GA, Roman Grimaldi, and Marcus Grimaldi of Johns Creek, GA, Jeffery Heriot and his wife, Janet, of Slidell, LA, Courtney Heriot of Tampa, FL, and Joseph Leone and Daniele Leone of Utica. Al is also survived by great-granddaughters Baylor, and Parker Wright, Presley Stoller, and great-grandson, Meyer Stoller. He also leaves behind a brother and sister-in-law, Vincent and Esther Grimaldi of New Hartford, a sister-in-law and brother-in-law, Patty and Joseph Caramato of Tampa, FL, and many nieces, nephews, and cousins. Al was predeceased by his loving wife, Dixie, his parents, Albert and Mabel Grimaldi, in-laws, Raymond and Theresa Martelli, sister, Connie Mannella and her husband, Peter Mannella, and sister-in-law, Joan Critelli. The family would also like to recognize some of the many friends Al leaves behind: Pete and Delores Giordano, Ricky Caruso, Philly Gulla, Joe and Cathy Sparks, Joe Lapaglia, Pasquale Ianno, Al Altieri¸ Steve Flint, Greg and Christy Marotz (and all the Caffe Caruso regulars), and his “southern friend” Bill Cook. Special thanks also go out to private caregivers Lori Lane and Bonnie Ferrone for the kind and compassionate home care they provided during Al’s final days. Notably touching was Lori’s gentle, caring manner during Al’s final moments, surrounded by his family. The family would like to apologize in advance to Al’s many friends who will be unable to pay final respects to him because of the current COVID-19 restrictions. The time he shared with you through the years was something he treasured. The family will honor Al’s life privately and funeral services will be held with immediate family only. Donations may be made in Al’s name to the Prostate Cancer Research Institute at pcri.org, or the Ovarian Cancer Research Alliance at ocrahope.org. Interment will take place in Calvary Cemetery. Please take a moment to connect with Al’s family through the “Memories” section of his obituary on our website. Our prayers continue to go out to all as a sign of our community support.

NORTH UTICA - Mr. Albert C. Grimaldi of North Utica passed away on June 3, 2020 with his loving family by his side. He was 85. Born on April 2, 1935 and raised in Utica, Al was the son of Albert and Mabel (Olite) Grimaldi. He was educated locally... View Obituary & Service Information

The family of Mr. Albert C. Grimaldi Jr. created this Life Tributes page to make it easy to share your memories.

Send flowers to the Grimaldi family.